“Water is an essential life-sustaining element. It pervades our lives and is deeply embedded in our cultural backgrounds. The basic human needs of a secure food supply and freedom from disease depend on it.” – Kofi A. Annan

From the dawn of our civilization, water has been a basic element in human life. Both physically and psychologically, water became our priority.
Water has been a metaphorical resource for understanding human life and its psychology, and for this reason, it has been used in different intellectual and cultural disciplines from philosophy, psychology, different religions to art. Water has been crowned as a vital fluid, in perpetual transformation and the source of life.
Leonardo da Vinci called water the “Vetturale di nature” (the vehicle of nature), completing its analogy with the blood in our bodies, which distributes vital nutrients to our organs. Leonardo, a scholar of the vital fluid, affirmed that “Water is the driving force of all nature”.
In 1977 scientists discovered life around hydrothermal vents in the deep ocean. Until then it was believed that photosynthesis was the conditio sine qua non for the existence of life, chemosynthesis replaced the need for light in this case. (Wilmoth Lerner & Lerner 2005)
The theory of hydrothermal vents becomes one of the most significant alternatives to the earlier theory of “primordial soup” that scientists are discussing about the origin of life on Earth. The location of water as the source of our existence is the idea that both theories have in common.

No compound of our physical formation is foreign to the composition of the universe. Water is the predominant compound of our physical composition, which depending on the moment of life and gender, ranges between 80 and 50%; this emphasises the continuous need for water for our survival, just as water is the vital sustenance for all the forms of life on which human beings depend.

“Cosmic dust may even be connected with life itself.” (Wickramasinghe et alii, 2010)
Our physical composition resembles comets and asteroids that reach the Earth from space; as Carl Sagan said in the famous phrase: “The nitrogen in our DNA, the calcium in our teeth, the iron in our blood, the carbon in our apple pies were made in the interiors of collapsing stars. We are made of starstuff.” (Sagan, 1980) (subsequently becoming the name of this side project as well).
Ice was already known to have existed in comets but liquid water was considered impossible for a long time (Wickramasinghe et alii, 2010) until traces of melting ice were found in several comets.

In 2011, the discovery of liquid water in the comet Wild 2 gave rise to various theories. The water composition of comets was different to the terrestrial one until the finding in November of the same year of 103/Hatley that came from Jupiter, its composition was very similar to the water of  our oceans. (Tristan 2011). These discoveries gave rise to the theory that the mystery of the origin of terrestrial water could be explained, and that it came to Earth from space and this discovery drove more interest towards the spatial search for water on other planets.

“Water is an essential factor in the emergence and continuation of life on Earth, and a vital step in our quest for signs of extraterrestrial life.” (Ecrenaz, 2004)
This makes us predict a new risk due to the human tendencies of colonization and
overexploitation of resources wherever we are. The overexploitation of fossil fuels that since the industrial revolution had increased the methane emissions into the atmosphere, added to the toxic substances and the problem of the disposal of new non-biodegradable products, has led to a global re-warming of the Earth long before it was expected. This new warming, unlike the prehistoric on the Permian period, augurs the extinction of all the species on which all human beings depend, thereby ensuring its end on Earth.

Implementation of creativity as a tool to train people in diverse thinking that makes it possible to search for new solutions, renewable energies, and ecological sustainability is now a pressing need for our survival.

We cannot be fooled by existing illusions, such as the myth that in the past humans lived in balance with nature, Yuval Noah Harari shows us in his studies that “The romantic contrast between modern industry that “destroys nature” and our ancestors who “lived in harmony with nature” is groundless. Long before the Industrial Revolution, Homo sapiens held the record among all organisms for driving the most plant and animal species to their extinctions. We have the dubious distinction of being the deadliest species in the annals of life.” (Harari, 2014)

Given these tendencies of human beings, both in our genetic charge and in our mental state, often guided by the repetition of learned unconscious patterns, it seems favorable to deduce that only by a mental change, a change in consciousness that drives other changes, will humans be able to overcome the challenges of our contemporary times. Bringing to consciousness our actions and our absolute interdependence with the environment can promote the collective mental change we need to be effective.

The ecological balance will only be possible with this change of mindset. Water, which physically constitutes us, is the basis of our ecosystem; we are perpetually bathed by this vital fluid, and humans – though without “gills,” – need water in the same fashion as any fish. Respect for our origin, evolution and our own constitution should be a priority in education and in our way of thinking and behavior.

The search for water and other resources in space could be positive for our survival as long as our mental tendencies are replaced and balanced; otherwise, we run the risk of further exploiting not only terrestrial resources but space resources as well. The training of our mind towards new mental states and an increased consciousness is now, more than ever, the key to achieving the ecological balance that could guarantee our survival as a species and that of many other species whose existence we depend on.

In any case, we know that human destiny is bonded to the Earth, and we know that nature will open its way and will remain in perpetual transformation after our leave, thus we should not forget that it is us who need nature and not the other way around. Today we have the opportunity to change the course of human history by training our minds and assuming responsibility // Beatriz Glez Sa*, artist, activist 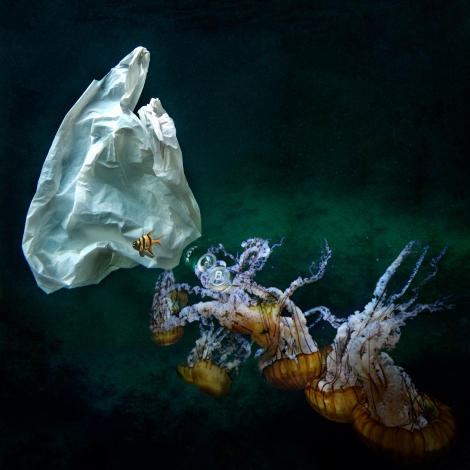