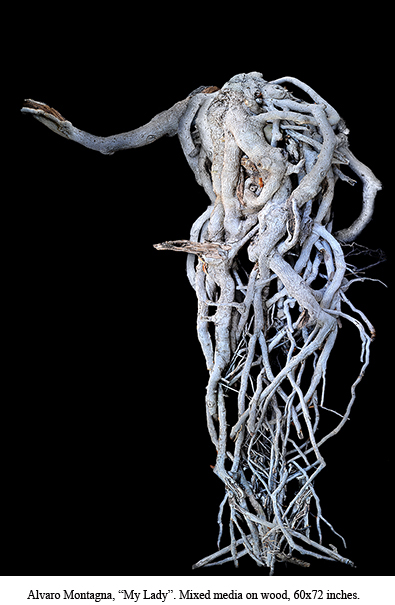 An exhibition of Alvaro Montagna’s artwork in a real interior

(November 1, 2013, New York) The exhibit “Rootementary” is a special project demonstrating Alvaro Montagna’s artwork in a real interior. Pepela Gallery and Restaurant will decorate its interior with Alvaro Montagna‘s artwork series. The exhibit is on view through December 23, 2013.

This exhibit follows Montagna’s solo show, “Life After Life”, in New York in May 2013 and his inclusion in two high-profile group exhibits in 2012: one presented by The New York Times and the other on the jumbotrons in Times Square. Alvaro Montagna’s mixed media artwork melds photography, painting and collage work on thin panels of wood.

Montagna’s current show is curated and presented by Re Artiste Inc., Montagna’s representation agency, and hosted by Pepela Gallery and Restaurant. The exhibited artworks reveal the intriguing workings of tree roots, exposing a deep emotional sensitivity to what is usually unseen and underground.

Alvaro Montagna was born in Montevideo, Uruguay. The Montagna family moved to the USA when Alvaro was a four year old boy. Montagna is an alum of Kean University, BFA, where he is an adjunct professor now. He has held creative positions at advertising agencies working with worldy renowned clients. A creative-being by nature, with the added education and experience, Alvaro Montagna has established his own design agency. In 2011, Montagna expanded his personal photography ventures and in two years he has amassed a body of work included in private collections and public exhibitions. Two pieces of Montagna’s work have been published in the “Art Takes Times Square” book, as part of his finalist placement with the “Artists Wanted” competition. Montagna is represented by Re Artiste Inc.

Alvaro Montagna burst onto art scene in 2012 when his series of provocative images, depicting labyrinthine workings of tree roots, placed Montagna as a top ten finalist from over 35,000 international artists in the “Artists Wanted” competition. Three of Montagna’s images were in rotation on the jumbotrons in Times Square as part of the exhibition, “Art Takes Times Square.”

In October 2012, Montagna was chosen for “Voces”, an exhibit of Hispanic artists, poets and musicians from all over Latin America at The New York Times headquarters.

In May 2013 Alvaro Montagna had his first Manhattan solo exhibit, “Life After Life”, where his large-scaled mixed media artwork was presented to the wide audience for the first time.

Alvaro Montagna’s mixed media artworks begin with a search in nature, with his walks in the woods where Montagna seeks out a specific root formation and captures it with photography. Back in his studio, he digitally isolates it from its surroundings to reveal the form of his original vision and his discoveries in the process. Individual sections are then separated out, printed, painted and varnished together to create the final piece. www.alvaromontagna.com

About Re Artiste Inc.

Re Artiste Inc. provides representation for both emerging contemporary artists and internationally acclaimed artists with the goal to build awareness and promote their artwork. The ReArtiste’s founders, Natalie Burlutskaya and Maria Kordova, are art business and event planning professionals whose passion for art led to supporting artists in the business aspects of their activities.  www.reartiste.com

About Pepela Gallery and Restaurant