November 15th, 2013, – the guests stopped by to meet Alvaro Montagna whose art was presented at Pepela New York. The beautiful townhouse on Park Avenue and 30th Street welcomed visitors and resembled a real home, cozy and warm.

Some guests had already heard of Montagna’s “Life After Life” series and his winning Number 6 at the “Artists Wanted” competition in 2012. Back then, his works were displayed on famous jumbotrons in Times Square as part of the project “Art Takes Times Square”. In November 2013 the fans of contemporary art have a chance to view Alvaro Montagna’s enigmatic mixed media art pieces literally close, in an intimate and very personal way. They temporarily became a part of Pepela interior. The idea behind this exhibit, “Rootementary”, is to show art in a real environment: a home, an office, an entertainment space, you name it.  At Pepela New York, Alvaro Montagna presents his series of mixed media artworks, introducing three new works and a new color palette.

At the Opening, Alvaro Montagna met the guests and had a chance to talk about his artwork, the theme for his art, and the complicated process of creation the artwork.

“You won’t believe”, – says Montagna to the guests, – “but my inspiration was driven by my frustration!..” Alvaro’s mixed media artworks begin with a search in nature, with his walks in the woods where he tries to find a specific root formation and captures it with photography. Back in his studio, Alvaro digitally isolates it from its surroundings to reveal the form of his original vision and his discoveries in the process. Individual sections are then separated out, printed, painted and varnished together to create the final stunning piece.

“What moves me and challenges me is my desire, my wish to be free!”- Montagna says. “And do you know what “to be free” means? When you can do the things you want, when you can produce something that inspires others, when you can spend all your time doing what you love. When I create I’m free”.

The exhibit is on view through December 23 at 104 East 30th Street, New York. 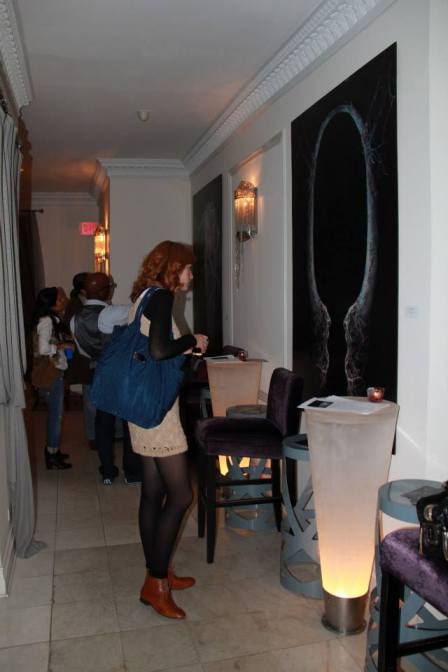 The gallery of Alvaro Montagna’s artworks 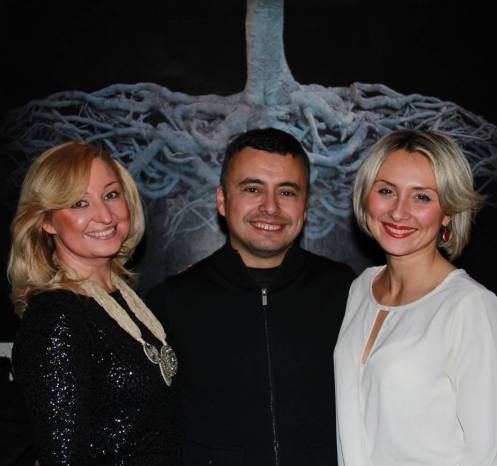 Alvaro Montagna and Natalie Burlutskaya and Maria Kordova, the owners of Re Artiste representing the artist