In New York, nobody gets surprised to meet people from an array of countries – NYC is a ‘melting pot’ (as it’s accustomed to say) for so many world’s offsprings coming here to pursue their dreams. We met Mensur Bojda, a painter from Macedonia, in Summer 2016. Mensur came to New York for the first time to exhibit his paintings at Gallery MC.

He was fascinated with the Japanese aesthetics – many of his paintings are inspired by Japanese history and characters. He was also thinking of moving to Japan for a while… But somebody mentioned to him, “when you come to New York, you will want to stay in New York!”

Natalie Burlutskaya/ RE:ARTISTE: Well, so how quick did you realize you wanted to stay in New York?

Mensur Bojda: To be honest I have to admit that I wished that when I came here, so as soon as I had offered the first opportunity for cooperation with Gallery MC I immediately started to work on my residence status and soon after that I had my own studio in NY. So I did have plans!

NB: What was the first thing attracted you in the city?

MB: The tendency of action I felt in the first few days was a perfect starting point for new production.

NB: Do you continue working on your earlier projects or did you get completely new ideas?

MB: Both. I believe that you build a house from the bottom – not from the top, so I want to say that new ideas are born from the present ones.

NB: Your artist statement has some pretty pessimistic clauses. For example, you call your drawing a “melancholic handwriting that has its own power.” You also say that your process is accompanied by “cramping, a nervous painting scar”. What is this about?

MB: I’m trying to create melancholic atmosphere in order to be aware of the outcome of the drawing as a base of my work.

On the other end, being not fully aware of the width of the brush strokes gives me a complete joy and freedom to observe the growing of the piece in full power.

NB: You are quite a young man – do you think that the ‘artist experience’ is more comprehensive and deeper than a ‘normal person’ experience? I deliberately juxtapose “artist” to “normal”.

MB: I do follow that the ‘conscious-being’ characterizes a person with experience, whether he is an artist or not. But I do know that introspection is no longer a very common part of an artist’s creativity.

NB: You are not from the family of artists (which often makes children want to become artists) – how early did you realize you want to be a painter?

MB: I had a very easy choice to make, and that was the only one thing I wanted to do: to draw.

NB: You were born in Kosovo, former Yugoslavia. Did the Kosovo bombing and collapse of your country in the 90s influence your decisions and views or were you too little to comprehend those historic changes?

MB: I do remember what was happening back then but it didn’t influence me, we had moved to Macedonia right before the things became serious.

NB: As an artist, what have you been researching? What is the main theme you’re fascinated with now?

MB: As I mentioned before, introspection is the airmail that leads us to self-acknowledge. Therefore, I find it in the figure of the human itself. And I am still fascinated by the colors.

NB: Your painting style is pretty ‘masculine’, as one of our friends put it. Do you think that “masculine” and “feminine” art exists? Or is this exaggeration?

MB: It is an interesting view, I had never thought that way before. I do believe the difference can exist between the brutal and the elegant, let’s say.

NB: Who are your favorite artists?

NB: I know you’re trying sculpture now. Do you like to continue working on sculpture or does oil painting remain your one and only favorite medium?

MB: I had a huge interest in other art disciplines since my early school days and never stopped having it. Although I consider painting a finish point of my research.

NB: Recently, you have participated in a group show inspired by Akira Kurosawa’s aesthetics and his movie, Yojimbo. When we met almost a year ago, you also exhibited your Japan inspired paintings. What is special about Japan and Japanese culture and art?

MB: All started with Samurai 7 by Akira Kurosava over 15 years ago. I was enormously attracted by Japanese aesthetics like Ukiyo-e art, cinematography, kabuki theater, manga, and even martial arts- I have been practicing Kendo since then. In this I find inexhaustible discipline, the necessary commitment, and sublime elegance.

NB: What are your plans now in New York?

MB: Looking forward into the developing of the next project with my dear friend Hadieh Afshani . Maybe we can ‘unite’ those masculine and feminine angles! 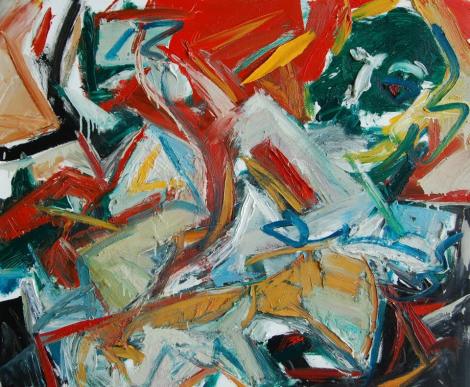